And you guys thought I forgot about this project! Oh no. I just been busy with school that I had to put the project on the back burner. However, I did buy the rocket turret from ThinkGeek.com. Here’s what I found from my dissection from this rocket turret.

Underneath the rocket turret was a couple of rubber stickers, which actually hid the screws for the base. After unscrewing the base, I found the main controller for the turret. I could not tell what was the microcontroller that was used, because I spent most of my time learning which wire controls the three motors inside the turret.

So I proceeded to tear apart  the bottom base some more.  Inside the base contains two motors. These motors are responsible for rotating the head of the turret as well as moving the head 0 to 180 degrees. 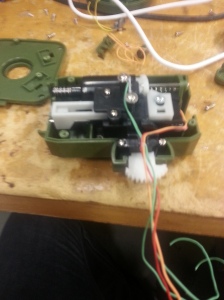 The final part I looked at was the main turret head. This was the part I ran into. The problem I was having was figuring out how the firing mechanism work. The firing mechanism uses a small dc motor, but there seems to be a certain sequence that must be achieved before the missile can be launched. Because of this, I’m changing the face tracker to use a small water pump I found on Nerdkits.com.

Well, that’s all I have for you guys today. I’ll let you know any new developments I have for the project.

Hey guys! I finally have some time to update the blog. So, I figure today’s blog post will be an update on my face tracking turret project. In my last post, I mentioned I ran into some difficulty with figuring out a way to implement the image tracking in Matlab.  However, I ran into an article that will jump start this project. 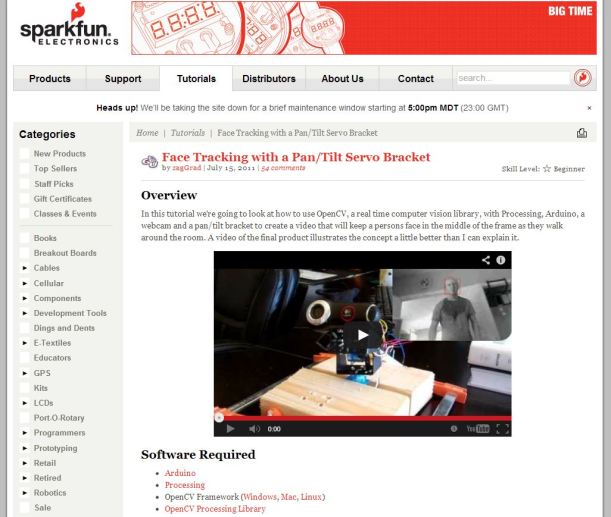 In an article posted by Sparkfun, they implemented a face tracker using Processing, an open source programming language developed by the folks who worked on the Arduino. The interesting thing is that there is an Open CV library, in Processing. For those who do not know, Open CV is an open source computer vision library that can be implemented in C++, Java, Python, and even Android. I’m 100% certain I will be utilizing the Open CV library for this project.

Hey guys! Long time no chat. Sorry for my lack of updates lately, but I’m not only swapped with school work, but I have a ton of research work as well. A couple weeks ago, I mentioned to you guys about my new project, the face tracking turret. Well, it turns it might be more difficult than I imagined. Not only because I never did image tracking before, but because my original idea on how to do the face tracking is probably not going to work.

Another important issue I started to think about was the turret’s defense mechanism. Originally I thought about using USB missile launchers, but there’s no documentation on how to take these things apart. I have two options: take the usb missile launcher apart myself and post the documentation online, or have the turret shoot water at its victims. I’m still thinking about it.

In the past, I always used PIC microcontrollers in a heartbeat. However, I think I will stick with the Arduino this time. Most specifically, the Arduino Mega 2560. You know the best part? I got it for free from my Mechatronics research. Another reason why I might use the Arduino Mega is the fact Simulink, Matlab’s graphical GUI interface program, fully supports Arduino. So, if I find a way to do image processing using the Matlab, then I can easily create Arduino system blocks in Simulink to create the turret. I am kinda of disappointed that I do not have any tangible results for you guys, but I am still planning for this project. Stay tuned for more details. 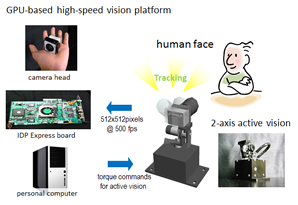 Hey guys! School is going okay-ish. I have fewer classes to take this semester, but I have a part- well contractual- time job, a lab assistant position, and a private tutor positions this semester. Not to mention an undergraduate research project to do. Speaking of which, I figured out my next project!

So the research I mentioned before is a mechatronics research. My friend and I are responsible for testing the new Mechtronics kits this semester. What’s cool about these kits is the fact that they use primarily Arduino, a Lego NXT motor and Matlab. Although I primarily use PIC microcontrollers, my experience with Arduino is much stronger than my experience with PIC microcontrollers. Lately, I came across a lot of tutorials which people are able to track their face using Matlab. Then I saw this beauty.

To make a long story short, I WANT TO CREATE THAT! I want to create a face tracking turret. Although my default choice is to use a PIC microcontroller, I might open the project to Arduino. One of the reasons I want to work on this project is not only the fact it’s wicked, but I have a final project to do for my Mechatronics class. You read that right. I’m doing Mechatronics research and taking a Mechatronics class at the same time. Ironic isn’t it (if not cheating according to my multiple friends)?

Keep in mind; I have no experience with image processing. In other words, I need to learn how to use the image processing library in Matlab. I already know how to communicate microcontrollers yo Matlab using serial communication, so I can just skip that step. What I need to figure out is whether I want my device to shoot out water, or to shoot nerf darts. This is going to be a fun project! I’ll see you guys later!

Error: Twitter did not respond. Please wait a few minutes and refresh this page.